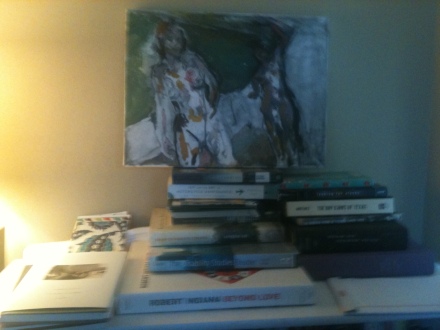 I practiced rituals of forgiveness, scattering
sage on the threshold or

peeling the wax leavings off the red candle.
None of it quite did

away with the needle that stabbed through
at odd moments of the day.

I found myself saying junior high things
like “I thought we were best friends.”

What is it to do harm? In some sense the
results were dramatic for me—

I left and/or lost a home, a knowing of my place
and what the objects around me

might mean. Morning: a slight shiver as
rain streaks across the windshield and the

rage, begins pounding her horn for no
reason I can see. I don’t utter your name.

Along the river here, swollen with autumn storm,
a willow grows half in, half out of the

water, a leafing so intense when I duck under
through the long twiggy curtains of branches

I feel quite erased. There is that scene in
the story—we both knew it by heart almost—

where the witch opens the oven and asks
the girl to crawl in. She doesn’t, but we all sense

that moment of hesitation, the green thrust of
a trust that should be able to remain unbroken.

I don’t call you “witch,” though sometimes other
things equally unkind. But mostly I puzzle as over

a photo in a locket, that picture in my mind.
We are at a table over our poems, we pass the

papers back and forth, scrawling messages of
encouragement. Ice thins the windows and the

trees—we do not notice them—slowly turn
blue with it, blue and terribly silent.

Of “Crawl In,” Sheila Black says,

This is a poem I sent out for at least six months with no luck; it was always the odd one of the batch–the one that wasn’t chosen.

I think I know why, but I like this poem a lot.  It is about a difficult subject. A few years ago I had a very close friendship end very badly and really without much warning—at least on my end. There is a history of women writers trying to write about fraught female friendships–I think of novelists like Margaret Atwood or Hilary Mantel, who have both tackled this topic, female envy, female power, what women don’t know how to say to each other or admit feeling towards each other–the difficulty of sisterhood, the notion of betrayal.

The relationship story was long and dense and in some ways mortifyingly so–and I knew I had to write the poem in a way that didn’t get bogged down in the narrative; where I didn’t whine or moan (which I felt like doing) to the point that the reader lost interest.  I wanted it also to be a little bit an elegy or a poem that gave me a space for forgiving, but also one that recognized just how terrible the end of the friendship felt.

I think when painful things happen to you, especially things you feel in some way victimized by–that is often the hardest subject matter to write about in a way that is remotely credible–you feel so invested, you tend to lose any sense of perspective, the proportion necessary to make the poem move outside you.  I was pleased when I stumbled upon the image of the witch and the oven from Hansel and Gretel–that is such a moving moment, because the children– Gretel in this case, hesitates because she is so used to wanting to please the adults–everything she knows about being a good and helpful child. That’s what makes the moment where she hesitates so terrible—we all feel the betrayal that is about to happen.  I knew then I wanted that to be the heart of the poem–the way we conspire in those moments and also the ways in which we resist and why.

More About the Poet

Sheila Black is the author of House of Bone, Love/Iraq (CW Press), and Wen Kroy (Dream Horse Press). She is a co-editor of Beauty is a Verb: The New Poetry of Disability, named a 2012 Notable Book for Adults by the American Library Association. A 2012 Witter Bynner Fellow, selected by Philiip Levine, she lives in San Antonio, Texas where she directs Gemini Ink, a literary arts center.

Are you familiar with this poet? Share your thoughts about her work! Cancel reply